‘Rafeef ’s poetry demands to be heard. She is powerful, emotional and political. Please read her work and see her perform. You cannot then be indifferent to the Palestinian cause’ says Ken Loach of Rafeef Ziadah’s poetry.

‘The words that she says with such beauty and grace hit you right in the heart. They are more powerful than any weapon.’ scholar, civil rights activist Angela Davis

Rafeef is a Palestinian spoken word artist and human rights activist based in London, UK. Her performance of poems like ‘We Teach Life, Sir’ and ‘Shades of Anger’ went viral within days of its release. Her live readings offer a moving blend of poetry and music. Since releasing her first album, Rafeef has headlined prestigious performance venues across several countries with powerful readings on war, exile, gender and racism.

Her third album Three Generations is a selection of spoken word poems, with original music compositions. The sequence of linked poems is a deeply moving, powerful, personal remembrance of Palestine, Al-Nakba, exile, defiance, and survival. It is also a beautiful testament to the human spirit, to ‘love and joy against skies of steel’.

We Teach Life, her second album, is a powerful collection of spoken word with original music compositions, which she brings to the stage with Australian guitarist and We Teach Life producer Phil Monsour.  Rafeef received the Ontario Arts Council Grant from the Word of Mouth programme to create her debut spoken-word album Hadeel. She regularly conducts spoken word workshops with the aim of empowering expression through writing and performance. She was chosen to represent Palestine at the South Bank Centre Poets Olympiad in 2012. 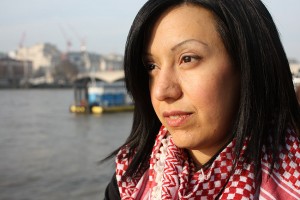 Rafeef’s debut ablum Hadeel is dedicated to Palestinian youth, who still fly kites in the face of F16 bombers, who still remember the names of their villages in Palestine and still hear the sound of Hadeel over Gaza. Rafeef’s debut CD Hadeel, We Teach Life and Three Generations are available at Bandcamp.